Doctors for President Donald Trump said in a press conference Saturday that Trump was diagnosed with the coronavirus 72 hours ago ― a day earlier than previously announced.

Physician Sean Conley referred to Trump as being “just 72 hours into the diagnosis now,” which would indicate the president was diagnosed with the virus three days ago, on Wednesday. Trump did not announce until early Friday morning that he and first lady Melania Trump had tested positive.

Doctors also revealed that Trump had symptoms on Thursday, including a “mild cough and some nasal congestion and fatigue.” The president received Regeneron ― an experimental antibody-based treatment ― 48 hours ago, Conley said.

Trump attended multiple campaign events in Minnesota on Wednesday. On Thursday, he went to a fundraiser in Bedminster, New Jersey, with GOP donors.

After the conference was over, an unnamed White House official attempted to clarify the timeline, telling reporters that when Conley said “72 hours” he meant that this was “Day 3” since the diagnosis, and that it had been two days since Regeneron was administered.

But that explanation raised new questions: Why should the public trust an anonymous source in a famously dishonest administration, as opposed to on-the-record, seemingly prepared remarks from multiple doctors? And if the doctors misspoke, why did they not clarify the timeline themselves? 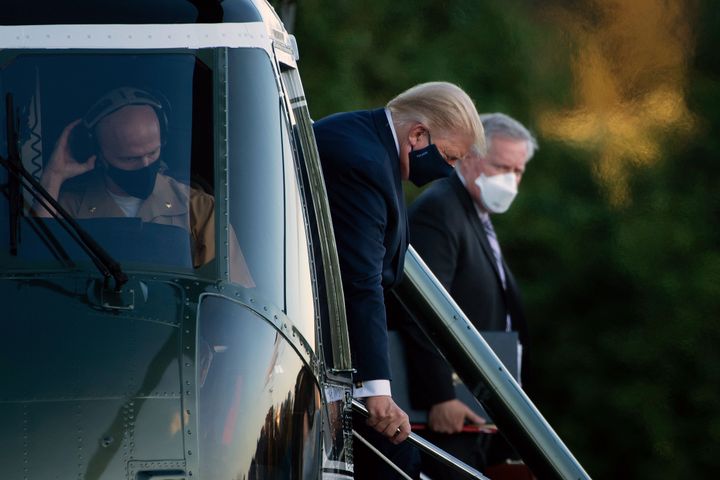 Conley also said Trump is now doing “very well,” and quoted the president as saying “I feel like I could walk out of here today.” Immediately following the press conference, White House pool reporters ― media members who follow the president throughout the day ― released a statement from an anonymous source that contradicted that optimism.

“The president’s vitals over the last 24 hours were very concerning and the next 48 hours will be critical in terms of his care,” a source described as someone “familiar with the president’s health” said. “We’re still not on a clear path to a full recovery.”

The doctors also said that Trump was not currently on oxygen and not having any trouble breathing, but repeatedly declined to say he had definitively not been on oxygen at all over the course of his treatment.

Later, a reporter said he was going to try to “pin [Conley] down” on the oxygen question one more time. Conley answered, “Thursday, no oxygen. None at this moment, and yesterday with the team, while we were all here, he was not on oxygen.”

Following the press conference, the Associated Press reported that Trump was “administered supplemental oxygen” at the White House on Friday before he went to the hospital.

Trump said he was “feeling well” in a Saturday afternoon tweet praising the doctors and nurses at Walter Reed.

The president  headed to Walter Reed National Military Medical Center in Maryland on Friday evening, following news that he had tested positive for COVID-19. Before departing, he thanked his supporters in a video message from the White House and said he was “doing very well” but was going to the hospital to “make sure that things work out.”

White House press secretary Kayleigh McEnany said earlier that day that “out of an abundance of caution,” Trump would be “working from the presidential offices at Walter Reed for the next few days.”

Conley said in a memo Friday that the president was fatigued but in “good spirits” and was taking an experimental antibody cocktail. The president also reportedly had a low-grade fever.

Melania Trump also tested positive and was experiencing a mild cough and headache on Friday.

Senior White House aide Hope Hicks also tested positive. She did not attend the Rose Garden event, but was traveling with Trump on Air Force One earlier this week.