Top Republicans defended President Donald Trump on Wednesday after he declared himself the winner of the 2020 election — even as there were millions of ballots left to be counted in several key states, including the critical battleground states of Michigan and Pennsylvania.

“It’s not unusual for people to claim they have won the election. I can think of that happening on numerous occasions,” Senate Majority Leader Mitch McConnell (R-Ky.) said at a news conference in Kentucky.

“I’m not troubled at all by the president suggesting that, because the other side is doing it too,” he added, noting that election disputes are often resolved in the courts.

In a press conference at the White House earlier on Wednesday, Trump attacked the legitimate counting of votes in several states that had not yet finished tallying absentee ballots, baselessly calling the ongoing efforts “fraud.” He later tweeted to falsely raise alarm about “surprise ballot dumps” and threatened to take the matter before the Supreme Court.

“They are working hard to make up 500,000 vote advantage in Pennsylvania disappear — ASAP,” Trump said in one tweet.

Officials in Pennsylvania say “millions” of early votes ― many from Democratic cities like Philadelphia and Pittsburgh ― have yet to be counted.

There’s nothing illegitimate or fraudulent about counting mail-in ballots. Experts have warned for months that initial results on election night would not accurately reflect vote totals because so many people voted by mail due to the coronavirus pandemic. Republican legislatures in Wisconsin, Michigan and Pennsylvania all blocked efforts to count ballots early.

Although he generally defended Trump, McConnell gently pushed back on the president’s claim that ballots are being counted illegally. “Claiming to win the election is different from finishing the counting,” he said. 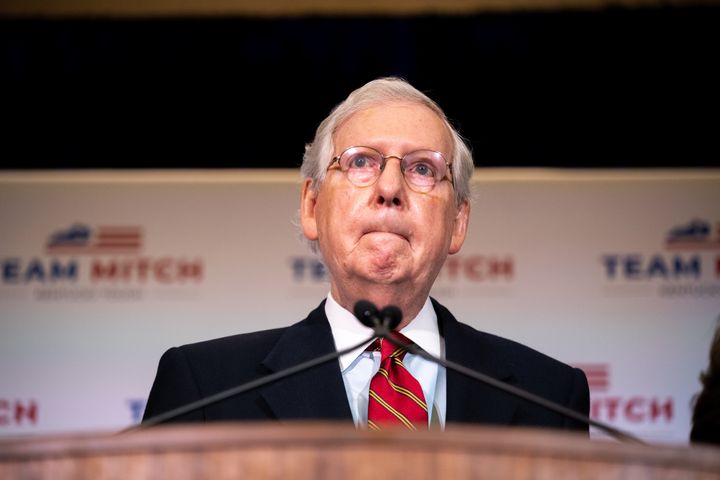 Vice President Mike Pence did not repeat Trump’s false claims in his remarks at the White House in the early hours of Wednesday morning, but he didn’t repudiate them, either. Instead, Pence simply said he believed he and Trump were on the road to victory and that votes were still being counted.

Other GOP officials’ reactions to Trump’s comments were similarly muted.

Sen. Marco Rubio (R-Fla.), the acting Senate Intelligence Committee chairman who had previously warned about the impact of foreign disinformation on the election, tweeted, “The result of the presidential race will be known after every legally cast vote has been counted.” The senator did not specifically mention Trump.

The election results in some states could hinge on how receptive the courts are to the phrase “legally cast” ballot, however. Republicans are trying to convince judges in several key states to throw out thousands of ballots that were cast using accommodations like drive-in voting and day-of vote-by-mail. The argument drew condemnation from longtime GOP election lawyer Ben Ginsberg.

During a call with reporters on Wednesday, Trump campaign advisers insisted the president would win the election if “legally cast ballots” were tallied. They also demanded a recount in Wisconsin, where Democrat Joe Biden has a slim advantage.

Biden campaign officials said they feel confident they’ve won Wisconsin, and that they expect to have an “insurmountable” vote-by-mail lead in Michigan soon.

Spokespersons for Sen. Roy Blunt (R-Mo.), the chairman of the Senate Rules Committee, which handles election issues, as well as Sen. Lamar Alexander (R-Tenn.), another member of the committee, did not respond to requests for comment.

Spencer Cox, the GOP governor-elect of Utah, offered the clearest rebuke of Trump, sending a “reminder” to his Twitter followers that “there is nothing nefarious about it taking a few days to count all legitimate votes. So take a deep breath and look for the good around you.”

Democrats, meanwhile, slammed Trump’s rhetoric as irresponsible and compared it to something one might hear from a dictator.

Sen. Chris Coons (D-Del.), a top ally of Biden, said Wednesday on MSNBC that Trump declaring victory before the votes had been counted was “both irrelevant and at some level outrageous.”

“You don’t just get to stop the counting at the moment you’re ahead,” he said, referencing his trips to observe election administration in countries in Africa.