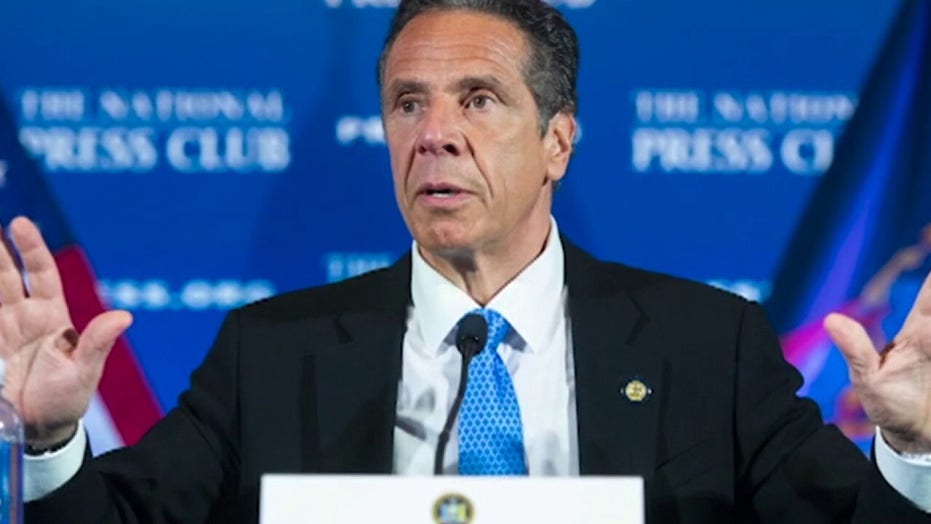 Gov. Cuomo: I put my head on the pillow at night saying I saved lives and that’s how I sleep at night

New York governor faces push back because of his pandemic response boasts.

New York Gov. Andrew Cuomo's office is pushing back against the mounting criticism it received for claims the governor made about forcing nursing homes to accept patients who tested positive for COVID-19.

He added: "So, it just never happened in New York where we needed to say to a nursing home, 'we need you to take this person even though they're COVID-positive. It never happened."

The New York governor argued that nursing homes were required not to discriminate against COVID-19 patients but could refuse them if they couldn't provide care while effectively caring for others in their facility.

Richard Azzopardi, a senior advisor to Gov. Cuomo, told Fox News: "Anyone who bothered to read the transcript would know the Governor was crystal clear and was saying what didn’t happen was the crunch on hospital beds that every projection especially the federal governments projections predicted."

He added: "Separately the law has always been that nursing homes could only accept residents that they could adequately care for. None of that has changed. Those who continue politicize this issue in a shoddy attempt to deflect from the federal government’s incompetent and disastrous pandemic response should be ashamed of themselves and every media organization should hold them accountable for what they are trying to do."

During Wednesday's remarks and in the past, Cuomo has claimed that he was following federal guidance. But Politifact rated that claim "mostly false" this summer, arguing that the CDC didn't force nursing homes' hands the way that Cuomo did in his March 25 order.

The order stated an "urgent need to expand hospital capacity," adding that "all NHs [Nursing Homes] must comply with the expedited receipt of residents returning from hospitals to NHs. Residents are deemed appropriate for return to a NH upon a determination by the hospital physician or designee that the resident is medically stable for return."

Health Department data through Sept. 30 reveals that the state saw thousands of COVID-confirmed deaths at nursing homes. In July, the state released a report which showed that 310 nursing homes saw 6,326 COVID-19 patients admitted between March 25, 2020 and May 8, 2020. That particular report prompted ridicule as it claimed that the governor's advisory couldn't have been a driver of nursing home deaths.

When Fox asked Azzopardi about the admissions figure, he said: "Most of them lived there in the first place and that was their home. Homes with new admissions took them because they had the facilities and the resources. No one who called [the Department of Health] and requested a transfer was den‎ied. ‎This is political conspiracy nut stuff."

Cuomo also has pushed back on the idea that he was responsible for deaths, instead pointing to the nature of the virus itself.

"I would say first of all, that's not why they lost a loved one … the premise of your queston is just factually wrong," he told the Finger Lakes News Radio during a press call.  "People who were lost in nursing homes were lost because that's where the virus preys. The virus preys on senior citizens."