Muslims are the least likely faith group in the U.S. to support President Donald Trump in the 2020 election, according to a new report by the Institute for Social Policy and Understanding. That’s not surprising, considering his pledges and actions that have targeted Muslims in the U.S. and abroad. But another survey finding is more jarring: the proportion of Muslims who back Trump has gone up since 2016.

Support for Trump’s reelection climbed 10 percentage points from 2016 to 2020, up from 4% to 14%, among Muslim Americans, according to the survey released Thursday. That increase came mostly from white Muslims, 31% of whom back the president. Only 8% of Black and Arab Muslims and 6% of Asian Muslims said they supported Trump.

That’s not to say Trump has many Muslim backers. The study found that Muslim Americans overwhelmingly prefer a Democrat for president: at 67% in 2016 and at 51% for the 2020 election.

With the presidential election just weeks away, the report ― the fifth of its kind from the organization ― offers crucial insights into voting trends of Muslim Americans, a community that experts say does not operate as a voting bloc due to being the most racially diverse faith group in the country. Despite making up only 1% of the U.S. population, at 3 million people, Muslim civic engagement has skyrocketed over the last few years and grabbed the attention of presidential candidates.

“The steady growth is really a testimony to the hard work that’s from so many in Muslim civil society who have focused on improving Muslim civic engagement,” said Dalia Mogahed, ISPU’s director of research.

But he still has a small band of Muslim American supporters. The study found that the small proportion of Muslims who support Trump was largely aligned with non-Muslim Trump supporters, prioritizing the economy as a top issue. Both Muslim and non-Muslim Trump supporters opposed building coalitions with the Black Lives Matter movement.  (The respondents who described themselves as white Muslims were asked by the questioner to self-identify.) 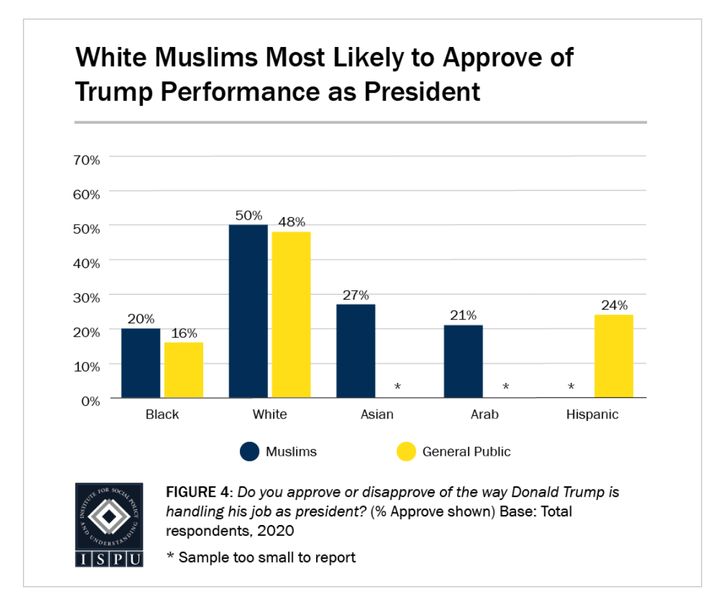 By contrast, most Muslim Americans are in favor of coalitions with organizations like the Black Lives Matter Movement. Nearly two-thirds of Muslims expressed support for such partnerships.

Su’ad Abdul Khabeer, the senior editor at Sapelo Square, an online publication that amplifies the voices of Black Muslims, noted that Muslims who align with Trump are often “recipients of privilege and power” and haven’t dealt with the aftermath of some of Trump’s racist or Islamophobic rhetoric.

Those Muslims who may not have been victims of explicit Islamophobia or racism are more able to compartmentalize different aspects of their identities, said Kameelah Mu’Min Rashad, the founder and president of the Muslim Wellness Foundation.

“Hearing [these numbers] makes me wonder what deeper conversations and spaces are needed for American Muslims to divest from whiteness to explore the impact of internalized white supremacy and internalized oppression,” Rashad added.

Though there is a perception that religious people are largely aligned with the Republican Party ― due to the political activity of white evangelicals ― the political beliefs of most Muslim Americans show that isn’t always the case.

“The idea that people vote for Trump because they’re so religious is not actually true. There are religious people on both sides,” Mogahed said. “Social conservatism and religiosity did not appear to be as strong of a factor as we might expect.” 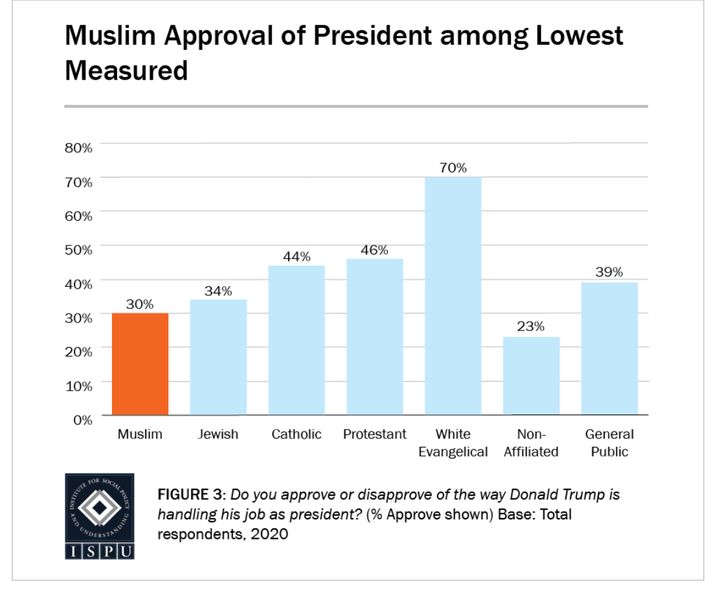 The numbers provided an interesting insight into the political leanings of Muslim Americans, who have become more politically engaged over the last few years. According to research released in 2018, more than 66% of American Muslims identified with Democrats, compared with only 13% who identified as Republicans. However, both groups were critical of the way their own parties treated their communities.

The ISPU, founded in 2002, is a research institution based in Washington, D.C.,  that conducts studies, gathers data and forms analyses on American Muslims.  The most recent report surveyed self-identified Muslims, Jewish Americans and other populations in March and April 2020 through Social Science Research Solutions, a market and survey firm.

SSRS interviewed 801 Muslim respondents, 351 Jewish respondents and 1,015 adults in the general population, totaling 2,167 people surveyed by phone and on the web. The survey has a margin of error at a 95% confidence level of plus or minus 4.8 percentage points for Muslims and plus or minus 7.2 points for Jews.

You can read the full report here.