Rupert Murdoch's News Corp has attempted to defuse Malcolm Turnbull's criticism of its coverage of the national bushfire crisis and climate change following a heated debate on ABC's Q&A between the former prime minister and a senior journalist.

Mr Turnbull attacked the Rupert Murdoch-controlled newspaper company on Monday night for blaming last summer's fires on arson and urged The Australian's editor-at-large Paul Kelly and other employees to speak out against the organisation. 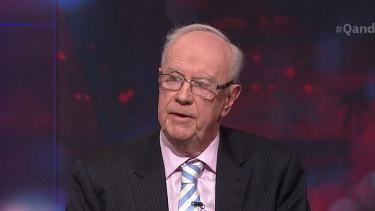 Paul Kelly during the interview.Credit:Stocksy

Mr Murdoch and his wife Kathryn Hufschmid, who has worked for the Clinton Climate Initiative, accused the global media empire of promoting climate denialism after News Corp's coverage of the bushfires gained global attention.

Former News Corp finance manager Emily Townsend sent an email to all employees earlier this year accusing her employer of spreading a "misinformation campaign" on climate change that was "dangerous" and "unconscionable".

"Contrary to what some critics have argued, News Corp does not deny climate change or the gravity of its threat," he said. "However, we – as is the traditional role of a publisher – do report a variety of views and opinions on this issue and many others that are important in the public discourse on the fires."

Mr Turnbull's issues with News Corp go far beyond climate change denialism. He is one of a 501,876 people to sign a petition created by former Prime Minister Kevin Rudd calling for a royal commission into the influence of News Corp. Mr Turnbull blames News Corp outlets for stoking division in his party which cost him his leadership. The petition was tabled on Monday by Labor frontbencher Andrew Leigh. It is unclear whether anyone in the party will back the call for the investigation.

Get our Morning & Evening Edition newsletters