President-elect Joe Biden accepted the job Saturday night in a victory speech from his home state of Delaware, promising to rebuild a country torn apart by multiple crises after four years of chaotic rule from President Donald Trump.

“I pledge to be a president who does not seek to divide, but unify, who doesn’t see red states or blue states, only sees the United States,” the 77-year-old Biden said while accepting a job he has sought, on and off, for the last 32 years. “The Bible tells us that to everything there is a season — a time to build, a time to reap, a time to sow. And a time to heal. This is the time to heal in America.”

Biden made clear in the speech, delivered in Wilmington, Delaware, in front of a crowd of socially distanced supporters who regularly cheered and honked their horns in support, that he has two major priorities: slowing the spread of the coronavirus pandemic, as well as reuniting a country torn apart by heavily polarized politics, continued systemic racism and Trump’s harsh rhetoric.

He promised to unveil a task force of top advisers on the pandemic Monday, and has previously promised to aggressively expand testing capacity once in office. The pandemic, which Trump’s administration has failed to contain, has roared to new levels in recent weeks. The United States has had record case numbers on each of the last three days.

“That plan will be built on a bedrock of science. It will be constructed out of compassion, empathy and concern,” he said. “I will spare no effort — or commitment — to turn this pandemic around.”

The speech reflected the successful campaign Biden had run — one centered around “restoring the soul of America” and reclaiming the presidency from a man Biden believed lacked empathy and decency.

Biden boasted he had put together the “broadest, most diverse coalition in history” in order to win key swing states. He claimed a mandate to use his time in office “to marshal the forces of science and the forces of hope in the great battles of our time” — to fight climate change and racism, as well as to defend democracy and to secure health care.

He also directly addressed Trump supporters: “I understand your disappointment tonight. I’ve lost a couple of times myself,” Biden said, referring to his failed presidential bids in 1988 and 2008. “But let’s give each other a chance.” 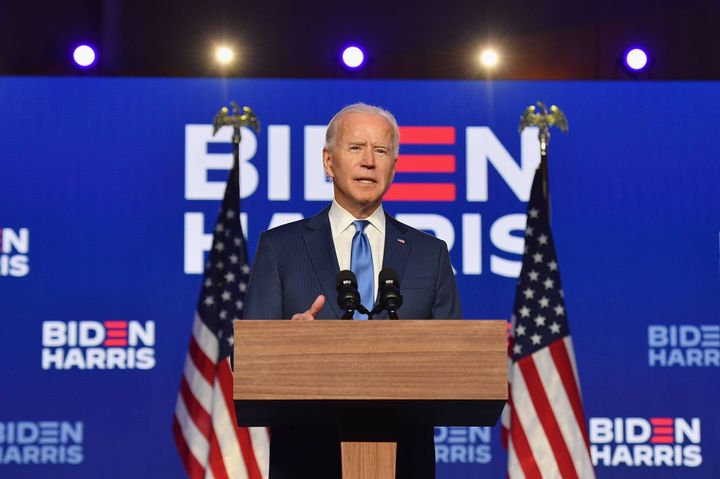 Biden, who had previously expressed hopes of replicating the transformative presidency of Franklin Delano Roosevelt, is likely to find his chances for major legislation constrained when he takes office in January. Democrats lost seats in the U.S. House and no longer have a chances to build a sizable majority in the Senate.

“It’s time to put away the harsh rhetoric, to lower the temperature, to see each other, to listen to each other again,” Biden said. “To make progress, we must stop treating our opponents as our enemy.”

Biden did not directly address his defeated opponent. Trump has yet to concede the election, and he continues to make false claims about voter fraud.

The president-elect celebrated after the speech with members of his family, including his son Hunter, who the Trump campaign targeted in the closing weeks of the campaign over his foreign business entanglements. The family of Vice President-elect Kamala Harris and her husband, Doug Emhoff, joined them, and Biden joked that they had become “honorary Bidens.”

In the closing moments of the speech, Biden worked yet again to display empathy, dedicating a hymn popular among Catholics — “On Eagle’s Wings” — to the families of more than 230,000 Americans who died from the coronavirus pandemic.

“And He will raise you up on eagle’s wings/bear you on the breath of dawn/make you to shine like the sun/and hold you in the palm of His hand,” he said, quoting the hymn.

“And now, together — on eagle’s wings — we embark on the work that God and history have called upon us to do.”