The development studio behind the acclaimed "Witcher" series announced "Cyberpunk 2077" all the way back in 2012.

In the years since, it's become one of the most hyped and highly anticipated games.

At Microsoft's E3 press conference in June 2018, fans finally got a first look at the new game. Then, one year later at another Microsoft E3 press conference, Keanu Reeves showed up to announce that he would play a character in the game — and, more important, that "Cyberpunk 2077" would finally come out in April 2020.

April 2020 came and went. Two delays later, and we're now just weeks from the launch of "Cyberpunk 2077" on November 19. Here's what one of this year's most anticipated games is all about, based on game trailers:

In "Cyberpunk 2077," you play as V, an urban mercenary and cyberpunk who takes on dangerous jobs for money. 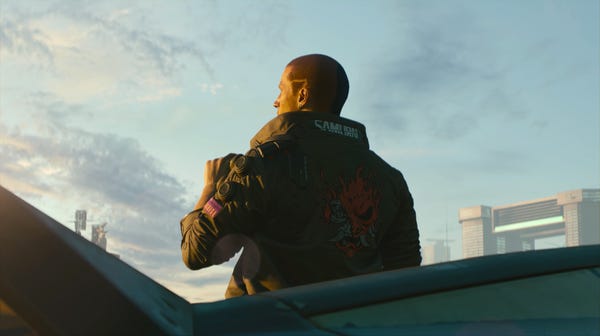 You create your own version of V, who can be male or female. Your choices affect some romance options and interactions with characters in the game, but most are unaffected by character selection. 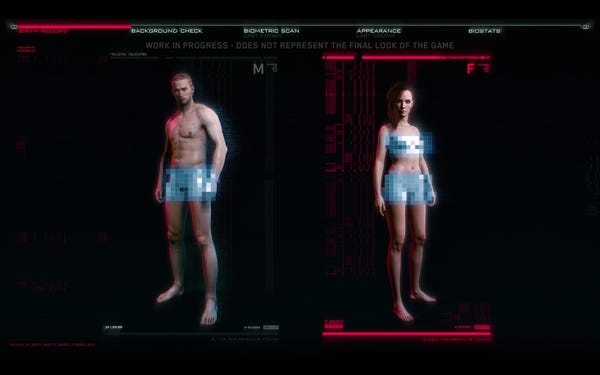 You can choose V's backstory, and the reason you're visiting Night City, where most of the game is set. For example, you can be there for romance, or revenge. 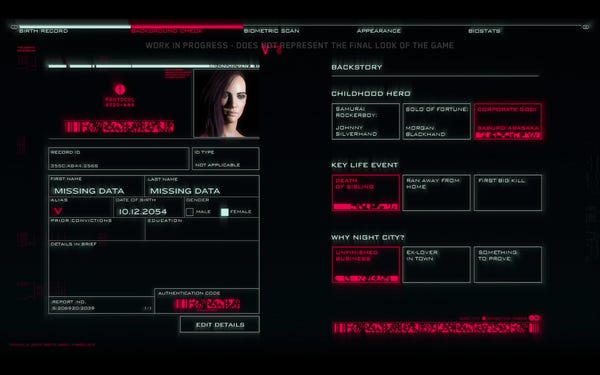 You can also choose your haircut, tattoos, and put points into various attributes like Strength, Constitution, Intelligence, Reflexes, Tech, and Cool. 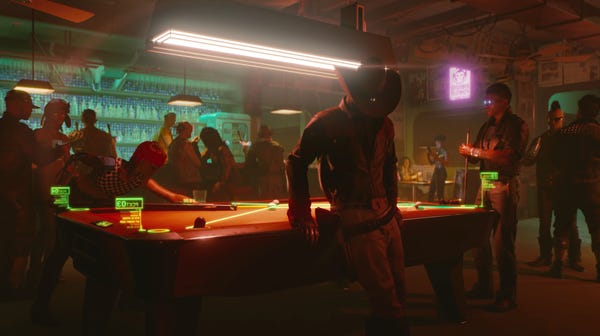 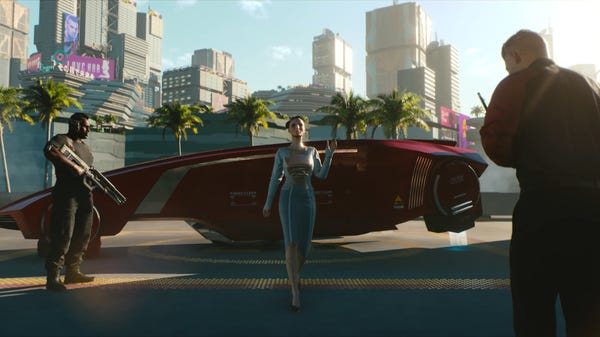 There are three classes in the game — Solo, Techie, and Netrunner. 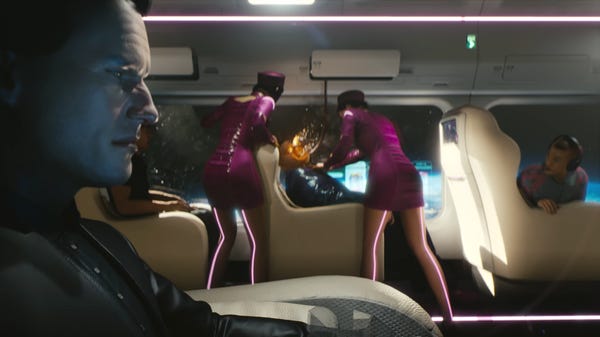 The Solo class is focused on combat.

Techies are focused on gadgets and machinery.

Netrunners can hack into computers, robots, or even into people's heads to manipulate or kill them.

You can choose to focus on one skill set, or a combination of the three.

"Cyberpunk 2077" is a non-linear role-playing game played from a first-person perspective. 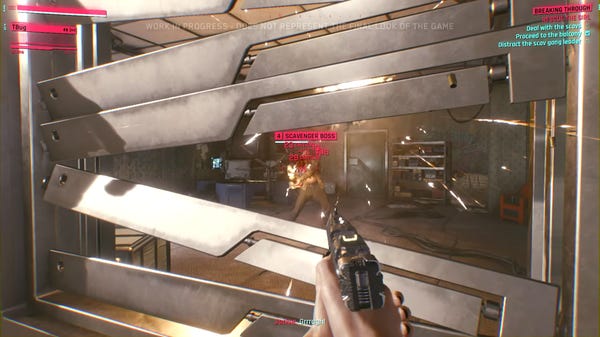 This means you'll be shooting weapons in first-person. Enemies have life bars, and damage numbers pop out of them when you shoot them.

You can approach each encounter in various ways: You can go in guns blazing, talk your way out of a problem, or turn parties against each other. 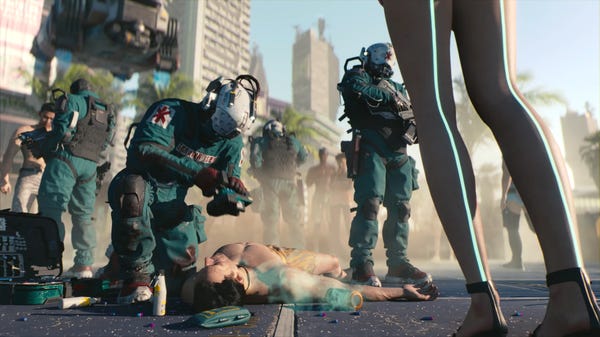 When you talk with the game's non-playable characters (NPCs), dialogue options will appear on screen, and each choice you make could have consequences. 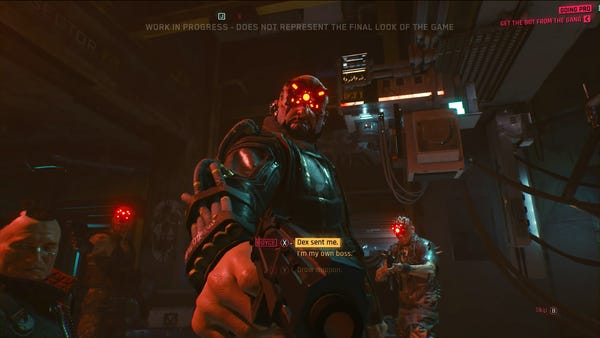 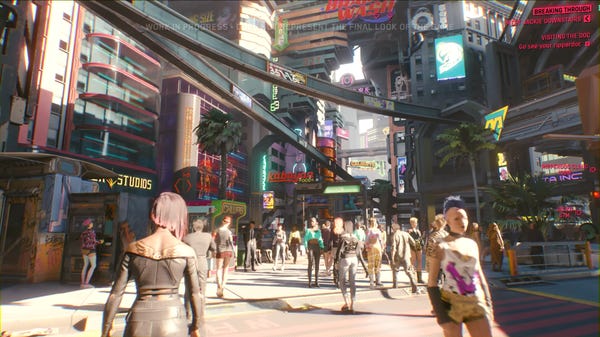 It's difficult to say how big the city is, but the game's developer CD Projekt Red says it's huge, packed with people, and has no transitional loading screens (like "The Legend of Zelda: Breath of the Wild" and "God of War").

Unlike the company's last game, "The Witcher 3," which featured a very flat map, "Cyberpunk 2077" is far more vertical, with buildings that just keep going up. 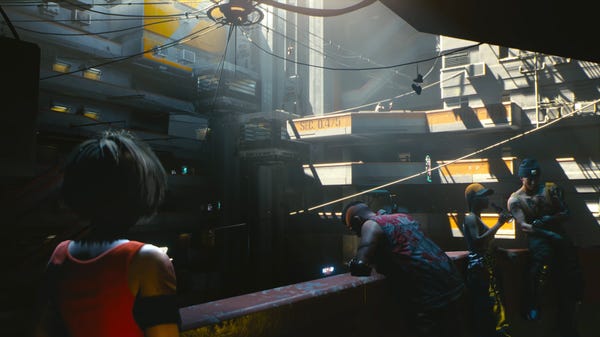 If you don't like traveling on foot, you can drive vehicles around Night City, including cars and motorcycles. 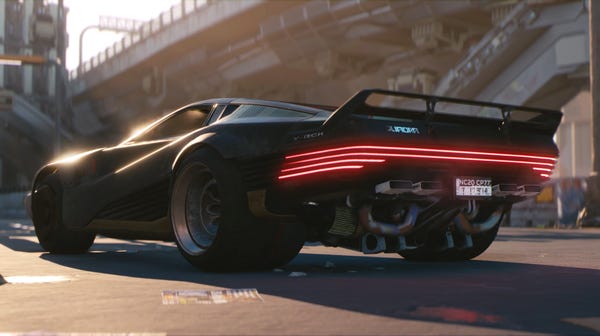 The mechanics of driving appear similar to that in the "Grand Theft Auto" games.

There are six districts in Night City, and they all have their own unique vibe. The game's creators have so revealed one district, called Watson, that surrounds an in-game fallen corporate giant. 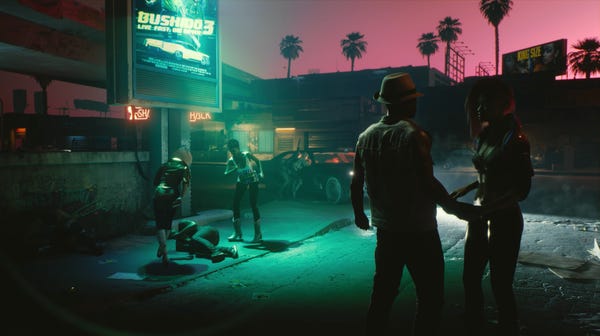 Night City is interactive: You can interact with advertisements, for instance, which can tell you where to buy certain products. 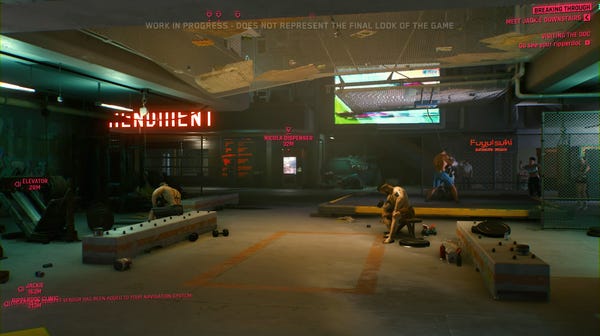 There's a day-and-night cycle in Night City, and an ever-changing weather system. 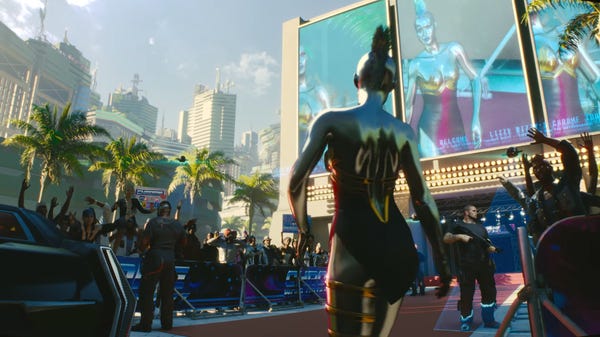 You'll be spending a lot of time in V's apartment, where you can suit up, check your computer, and access your weapons. 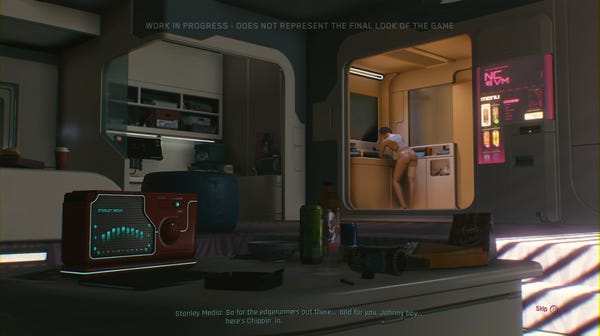 You can buy additional locations to use as bases through the course of the game.

You can unlock skills in the game and use them to your advantage. 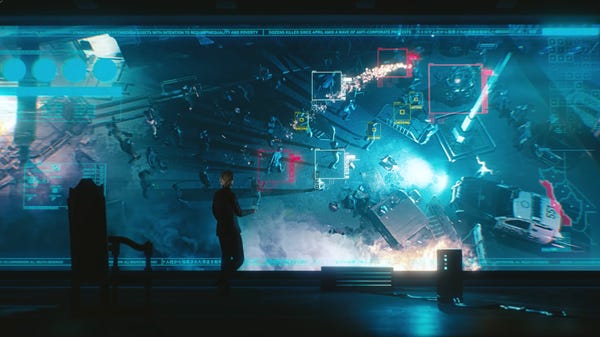 With a high enough engineering skill, for instance, you can disassemble panels in walls to open up new paths.

"Cyberpunk 2077" has an inspection system that lets you learn about objects, lore, and other useful information. 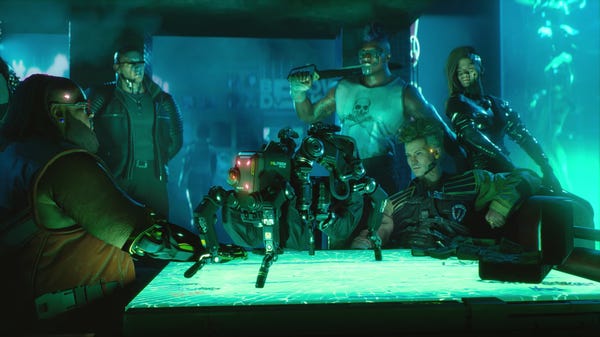 You can use this system to link with a spider-like bot, which can scope out environments, climb walls, pass through vents, and be stored in the trunk of your car when not in use.

By doing things in the real world, you gain Street Cred, which helps you unlock new dialogue or vendor prices throughout the city. 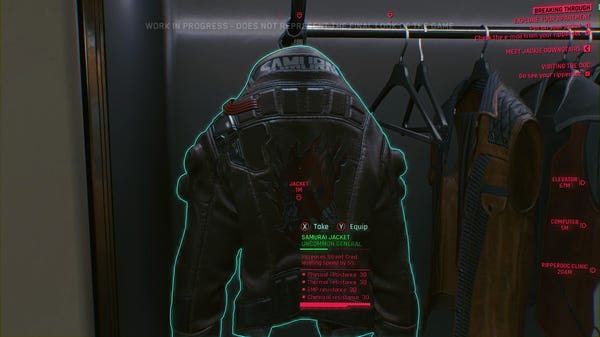 It's likely that some side quests will only be available if you have a certain amount of Street Cred.

V wears a special jacket that plays an important role in the game. It also gives you an initial 5% Street Cred boost. 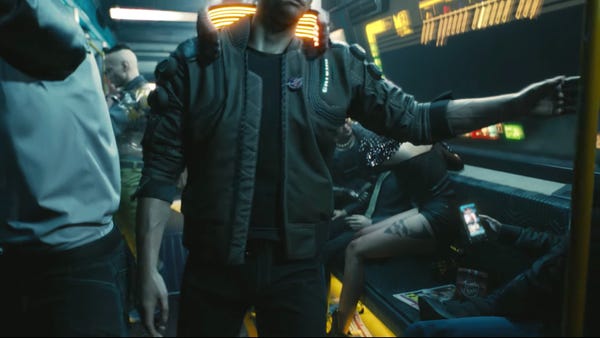 Combat is a big emphasis in the game: One gameplay demo featured three to four different guns, all with very different perks for using them. 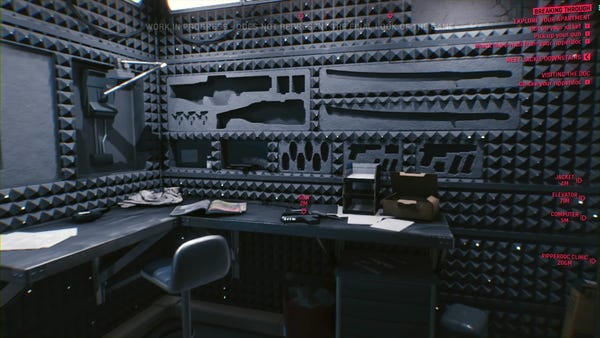 The demo featured an "epic" weapon called the Smart Rifle, which has bullets that track and follow your targets. You can use mods to customize all the weapons in the game.

Enemies hiding behind cover? No problem. Your scanner can spot enemies ducking behind barriers, and another gun you can obtain in the game lets you bounce bullets off walls. 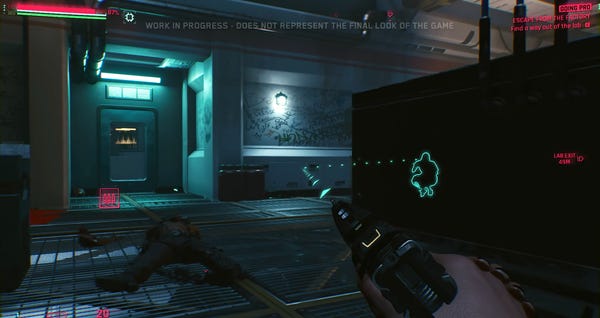 The world isn't fully destructible, but windows and bodies are — so you can blow off arms or legs strategically, assuming you're a good enough shot. 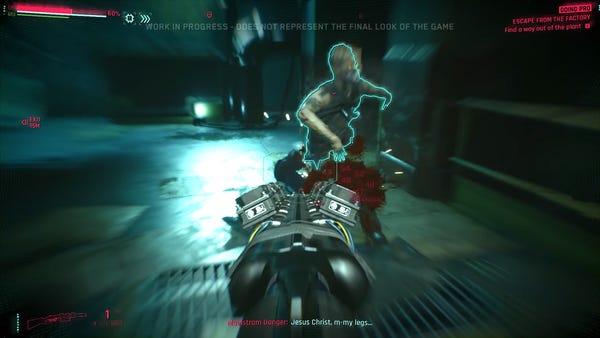 If you'd rather use your hands than your weapons, your character is also equipped with twin Mantis Blades, which you can use to climb walls and chop up enemies.

V can also run on walls and jump down onto unsuspecting enemies.

V can also hack into bad guys and send malicious software to the rest of their squad. 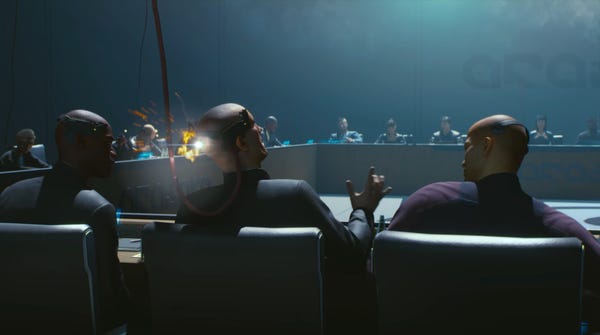 In the E3 2018 demo, V plants a virus in a bad guy's weapon to prevent him from shooting when she approaches.

Like "Grand Theft Auto" and "The Witcher," parts of "Cyberpunk 2077" involve sexually explicit themes. The game is not for children, and features full-frontal nudity. 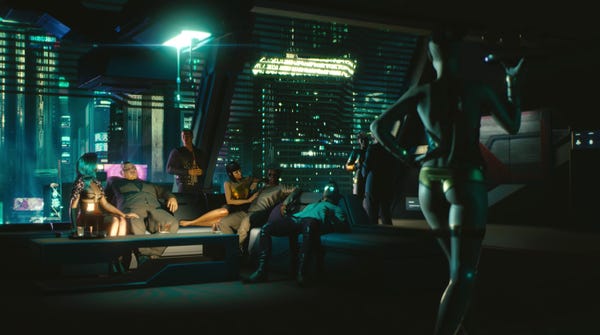 The game also heavily features drugs and drug use. 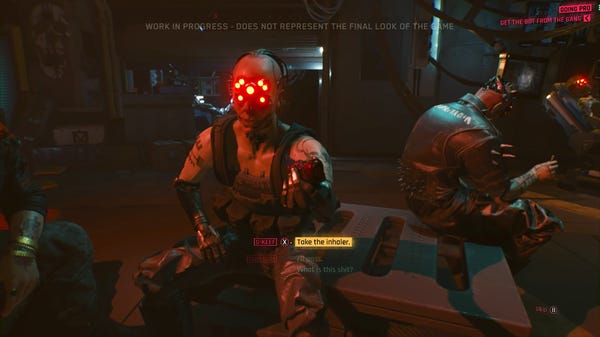 Drugs can be found and used as part of the story and in social contexts: If a gang member offers you a hit of his inhaler, choosing whether or not to accept could have consequences.

Most quests in "Cyberpunk 2077" come in the form of jobs, which can be acquired in different ways. Sometimes you get them by talking to fixers, who find mercenaries like V to come in and solve problems. 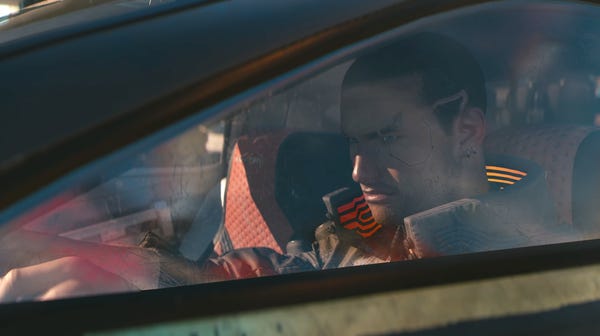 Other times, you'll see things happening on the street and can choose to get involved. The game's developer says it wants missions and quests to feel organic.

"Cyberpunk 2077" is a single-player game at launch with no multiplayer, although one of the game's designers Patrick Mills says a multiplayer mode is in development and may make it into the game at a later date. 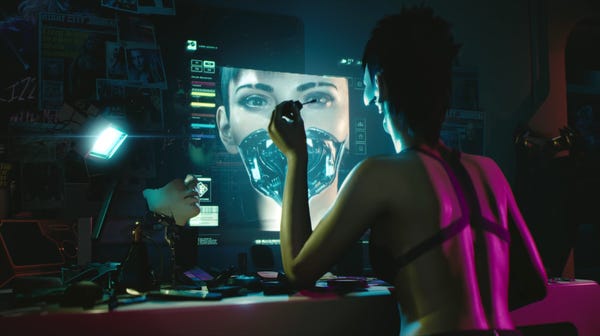 And while this isn't a game with a party system, you'll occasionally be joined on jobs by other characters. 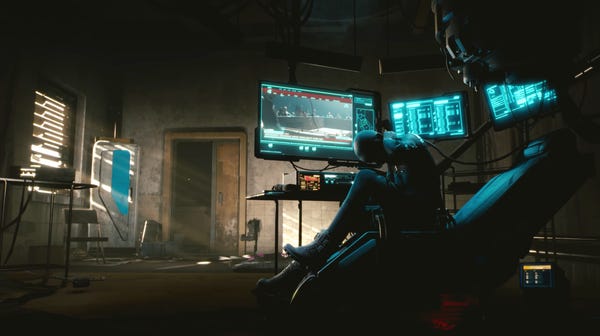 The game's release date is now set for November 19, 2020, and it's coming to PC, Xbox One, PlayStation 4, and Google Stadia. 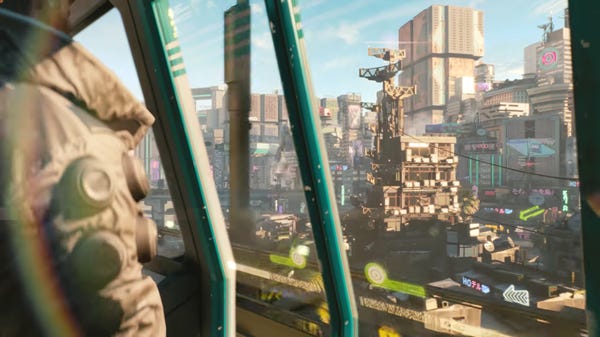 Enhanced versions of the game with upgraded graphics are scheduled to arrive on next-gen PlayStation and Xbox consoles at some point in 2021.

You can watch a 50-minute gameplay video for "Cyberpunk 2077" below. (Note: The video contains gameplay violence and adult themes.)