The news is everywhere — the light at the end of the quarantine tunnel is finally within sight.

Pfizer announced that its COVID-19 vaccine, which is in the late stages of clinical trials, has proven to be effective. The company is expected to file for emergency FDA clearance in the coming weeks, and another pharmaceutical company, Moderna, recently announced similar results for its version of a vaccine.

This creates an unprecedented challenge for the world's cargo carriers, whose airplanes are expected to carry most doses between countries and regions, with ground shipping making up the "last mile" to care providers and patients.

The good news is that Pfizer's vaccine can be packed and stored in specially designed boxes with dry ice for up to five days, and those boxes can be kept in fridge temperatures of 2-8 degrees Celsius, or 36-46 Fahrenheit — which is the storage temperature for conventional vaccines — for five to 10 days. Moderna's is expected to be fridge-stable for a bit longer. That's crucial, because planes and trucks simply can't be cooled down to -94 Fahrenheit. While that's a fairly short timeframe, it should be enough for cargo carriers to move the vaccine.

But not every airline is as prepared for the challenge of carrying vials of vaccine around the world at sub-zero temperatures. While companies like Pfizer and Moderna were racing to develop a vaccine, carriers were making their own preparations, based on the most likely requirements for moving different sorts of drugs that might be needed.

And given the Pfizer vaccine's stringent storage requirements and the similar needs of Moderna's, it appears that some carriers are about to end up winning a lot of business.

Here are the big winners, and the losers, as the shipping world prepares for the vaccine. 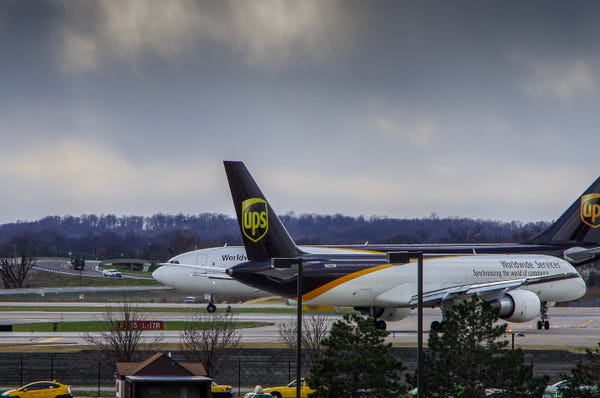 Back when it wasn't clear whether regular refrigeration would be enough to store a vaccine, UPS gambled that it wouldn't be. The company built large freezer farms near two of its air freight hubs — one in Louisville, KY, and the other in the Netherlands. The facilities can store up to 48,000 vaccine vials each at temperatures as low as -112 Fahrenheit, plenty cold for both Pfizer's and Moderna's solutions.

The two facilities leave UPS well-positioned to transport the COVID-19 vaccine — the shipping giant will be able to store some doses longer for connecting flights, and move others quickly.

Emirates has doubled down on an already robust cargo operation during the pandemic, converting passenger planes into temporary freighters, and taking advantage of surging demand amid lower capacity.

Last month, Emirates SkyCargo, the airline's dedicated freight division, said it was reopening its shuttered airside cargo terminal to serve as a hub for vaccine distribution. The facility has about 4,000 square meters of temperature-controlled pharmaceutical storage space, which can hold up to 10 million vials of vaccine at a given time.

Tthat storage space only gets as cool as 2-8 degrees Celsius — not nearly as cool as the vaccine requires.

That makes it unlikely that the shipper can hold onto vials for very long. However, the integrated air and ground operations at the airport mean that it can repackage shipments with more dry ice in between flights more efficiently, and keep the vials moving quickly, rather than storing them for any significant length.

Regardless, the scale of the airline's cargo operations, combined with its facility, means that it will likely serve as a vaccine hub for the Middle East and Indian subcontinent, especially as later vaccine options emerge which can be stored at the more traditional 2-8 degrees Celsius. 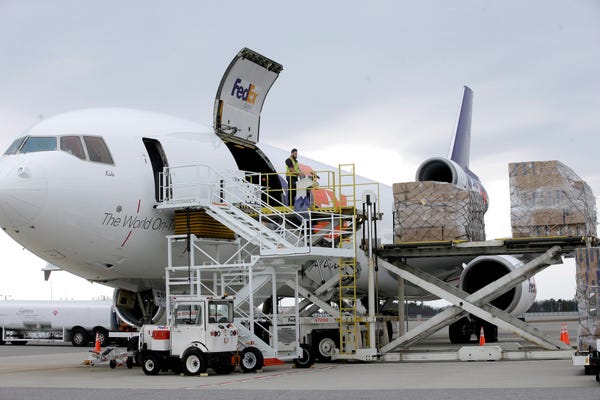 With a large international air and ground network, FedEx is expected to be another major player in shipping the vaccine. The company has added freezers, refrigerated trucks, and sensors throughout its fleet, Bloomberg reported in August, and more than 90 cold storage facilities throughout the Americas, Asia, Australia, and Europe, chief operating officer Raj Subramaniam said during a September earnings call.

In addition to the cold storage ground capabilities, FedEx has worked with the FAA to increase the amount of dry ice it can carry aboard cargo aircraft — a crucial aspect of transporting the vaccine.

"On average, we now transport approximately 500,000 dry ice shipments a month," a spokesperson for the company told Business Insider.

The company also announced a new tracking feature in September which will help the company expedite and prioritize vaccine shipments, Brie Carere, the carrier's chief communications officer, suggested during the September call. With a presence in 220 countries and more than 600 aircraft in its fleet, FedEx will likely be a major player not just in carrying the completed vaccines, but also in transporting individual components through the supply chain. 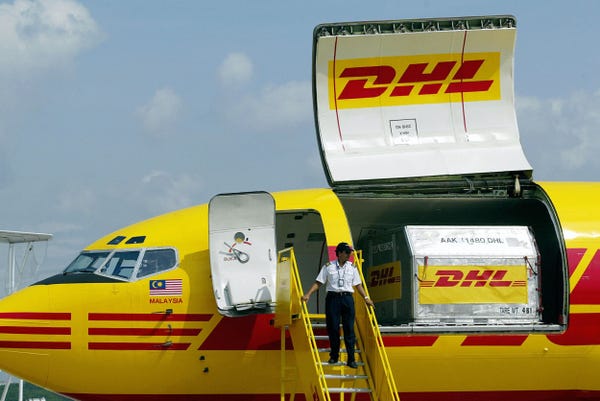 DHL, another major global freight carrier, also has cold storage capabilities, as well as a fleet of 250 aircraft with operations in 220 countries. DHL also contracts out some flying to other carriers, including Polar Air, which will give the company a capacity boost during the peak shipping season.

DHL has also been planning for the challenge of delivering ultra-cold vaccine doses, running analyses with consultant McKinsey and Company to find the most efficient end-to-end solutions.

The company also recently expanded its Indianapolis, IN cold storage facility, which it expects to make heavy use of. 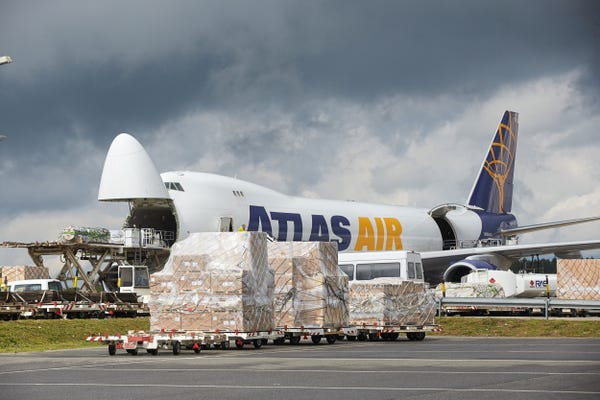 Atlas Air has one of the largest fleets of 747 jumbojet freighters, which means it can carry large vaccine shipments on each flight. The airline also has contracts with the larger shipping companies and freight airlines when demand exceeds their capacity — something to be expected as the initial vaccine release appears on track to collide with the peak shipping season, November through February.

Atlas declined to share any specific preparations with Business Insider, but a spokesperson said that the company was "committed to working with our customers, both government and commercial, in providing capacity and meaningful support in the global transport of vaccines." 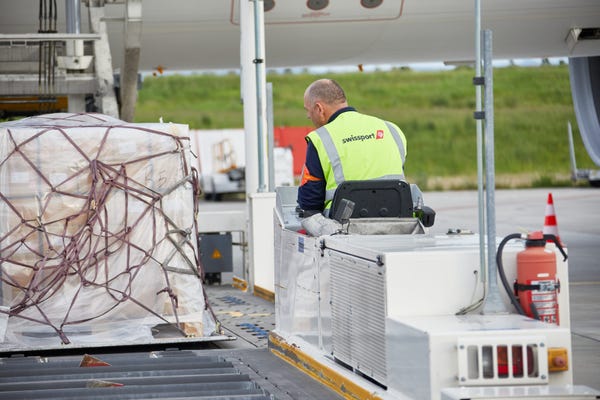 Swissport provides ground logistics services at airports around the world for both cargo and passenger airlines. With a presence at nearly 300 airports in almost 50 countries, the company has an especially heavy presence in Switzerland, Belgium, and Germany — major pharmaceutical industry hubs.

Pfizer has said it plans to manufacture its vaccine in Puurs, Belgium, as well as Kalamazoo, Michigan. Over the past four years, Swissport has invested in expanding its pharmaceutical cargo infrastructure, including in Belgium, leaving it well-prepared to handle vaccine shipments during the pandemic. 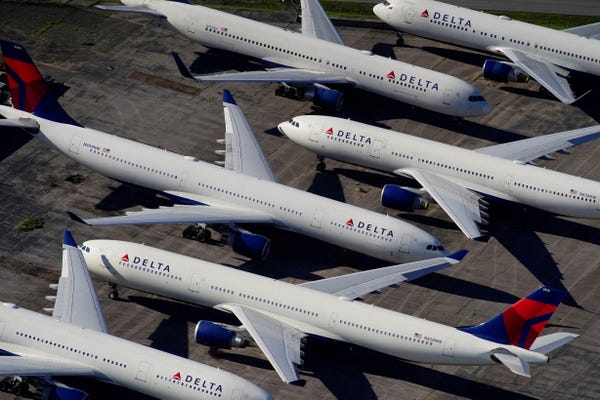 Passenger airlines around the world generate a significant portion of their revenue by carrying freight in their cargo holds, using space not taken up by luggage — "belly hold space," in industry parlance. These airlines don't often have on-the-ground cargo facilities, instead employing contractors like Swissport.

Given the precision required in transporting the vaccines currently leading the pack, including Pfizer's and Moderna's, those airlines appear less capable of carrying the sensitive cargo.

Beyond that, however, many of those airlines have grounded large portions of their fleets, slashing their schedules as travel demand plummeted. That means that even passenger airlines with strong cargo operations have limited available capacity.

"The 'losers' will be airlines that don't have dedicated freight business units (which, I believe, includes the ultra-low-cost-carriers), have poor on-time performance, or serve communities that won't be able to accommodate the vaccines, even with the dry ice," said Henry Harteveldt, an airline industry analyst.

Still, he said, even those airlines might be able to capture some of the surging air cargo demand.

"Even though American Airlines hasn't operated dedicated freighters for decades, they have probably put the most focus on freight of the US3 [American, Delta, and United]."

Do you have a personal experience with the coronavirus you’d like to share? Or a tip on how your town or community is handling the pandemic? Please email [email protected] and tell us your story.

Get the latest coronavirus business & economic impact analysis from Business Insider Intelligence on how COVID-19 is affecting industries.