Is the Christmas economy worth salvaging? Unless you're in retail, the answer is: Possibly not.

Across Europe, governments have imposed lockdowns through November into early December in the hope they can open up their economies for seasonal festivities.

But while the numbers show that retail and hospitality sectors tend to get a net boost from Christmas, the jury is out on whether it actually does the wider economy much good at all. 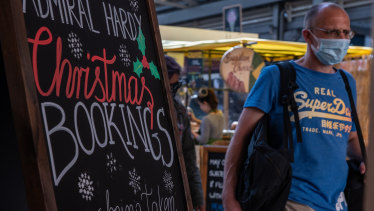 Europe is bracing for a bleak Christmas.Credit:Getty Images

This year the question is all the more pressing because of the risk that a premature reopening could trigger a third wave of coronavirus infections with dire consequences for both public health, economic growth and employment.

That kind of spending gives a substantial one-off shot in the arm to the retail sector: in the UK, December sales are generally around 12 per cent of the annual total – nearly half as much again as what the monthly average would be.

Even if spending dips in January as consumers pull in their belts, economists say the net effect is invariably positive.

That said, the adoption across Europe of the so-called Black Friday sales day in late-November has made the final run-up to Christmas less critical. And the growth in online shopping makes it less necessary for some stores to be physically open.

Thus, German retail association HDE sees sales in November and December this year increasing 1.2 per cent compared to 2019, driven by online sales, food, furniture and hardware – even if brick-and-mortar retailers of clothing, perfumes and toys will suffer.

And one final thought: Even if consumers do not shop before Christmas, that does not always mean the economy loses out.

Last-minute shopping is the most visible aspect of the Christmas economy and the one that broadcasters tend to focus on. However, there are less tangible but equally real economic impacts too.

One is productivity, which can take a dive as gift-buying, partying and the general bustle of Christmas distracts workers.

While the phenomenon is hard to quantify, facilities and services group Sodexho found in a 2016 survey that 25 per cent of workers reported lower motivation and productivity and a similar number admitted trying to avoid taking on new work.

While some of that might be down to stress related to end-of-year targets, employer groups like the UK's Reward & Employee Benefits Association (REBA) acknowledge a distracting effect linked to Christmas and offer tips on how to combat it.

More controversially, some economists suggest that the very act of gift-buying can be bad for the economy.

The argument rests on applying the theory of "deadweight loss" – which typically happens when things like monopolies or trade tariffs distort the market – to the exchange of gifts.

In his 1993 paper The Deadweight Loss of Christmas, Yale professor Joel Waldfogel concluded that when people overpay for gifts – especially unwanted gifts – that was tantamount to destroying the economic value of those products.

While that and the conclusions of Waldfogel's follow-up book Scroogenomics are hotly debated, few dispute that Christmas has unintended knock-on effects for the economy that have to be paid for by someone. 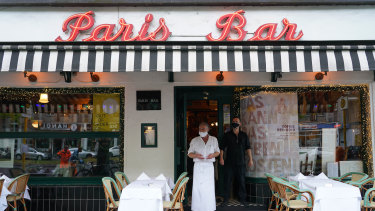 Economies across Europe are hopeful of ending lockdowns by the peak Christmas shopping period. Credit:

Such factors, known by economists as externalities, could include the cost to the environment of all the packaging and plastics associated with a typical celebration. Or the cost to health services of dealing with drunk-driving accidents.

Working out the overall impact on gross domestic product (GDP), the standard measure of economic activity, of Christmas is next to impossible. But the data do at least suggest its significance is over-estimated in many quarters.

In the UK, a big spending Christmas nation that also happens to produce monthly GDP figures, last year saw output shrink 0.3 per cent in November, rise 0.3 per cent in December and record zero growth in January of this year: in other words, the economy idled.

Data on new coronavirus cases in coming days should start to show whether Europe can indeed safely reopen for Christmas. But from the point of view of the economy, it might not be the end of the world if it doesn't.