The S&P 500’s 11% peak-to-trough sell-off in September has tested bullish investors, as a resurgence in daily COVID-19 cases and uncertainty surrounding additional stimulus and the November election serves as an overhang for the stock market.

But according to a Wednesday note from Fundstrat’s Tom Lee, investors can rest easy if the S&P 500 manages to close above this “line in the sand” — 3,363.31, or the 38% Fibonacci retracement level of the June 29 low and the September 2 high.

If the market is able to decisively close above that level, investors would have “a greater sense the worst is indeed behind us,” Lee said.

Read more: Sustainable-stock funds are snapping up shares of these 20 companies – and most of them beat the market during September’s turmoil, RBC says

In technical analysis, the Fibonacci retracement tool is used by traders to help identify potential levels of support and resistance that the market might encounter during a sell-off or rally. The tool is based off of the Fibonacci “golden ratio” and focuses in on the 61.8%, 50%, 38.2%, and 23.6% levels of a market move.

The S&P 500 managed to find support in September at the 61.8% retracement level of the late June to early September rally. Put another way, September’s 11% sell-off in the S&P 500 retraced 62% of its summer rally. 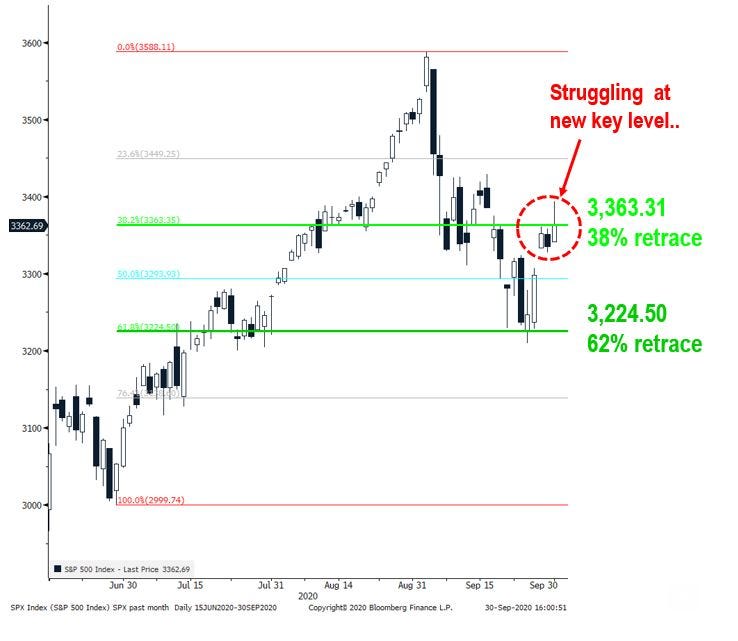 In Thursday afternoon trades, the S&P 500 traded 15 points above the key level, signalling that a close above the level may be imminent.

From there, the next level of resistance traders will have their eyes on is the record high of 3,588 reached on September 2, which represents potential upside of 6% from current levels.

What could drive the market higher from here? According to Lee, “over the next 30 days, we could see therapeutic/vaccine news.” Additionally, Lee pointed to the high level of cash on the sidelines ($4.3 trillion) and negative AAII retail investor sentiment, which signals that the pain trade is likely higher, not lower from here.

Read more: A portfolio manager who’s outperforming nearly all of her peers this year shares 4 high-conviction stocks driving her strong performance across 2 funds